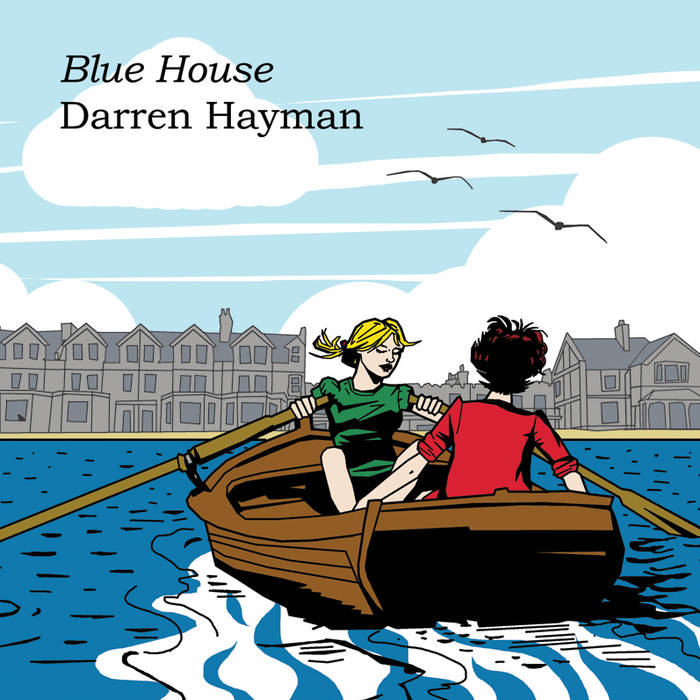 Tim Walker In the "folk/rock" area of Hayman's artistic Venn-diagram, this EP (mini-album?) deserves not to be overlooked. ("Leaves And Stars" is going in my "Introduction to Darren Hayman" playlist...) Favorite track: Leaves and Stars.

Darren Hayman releases Blue House
I like collections of five or six songs, seven even. It’s unfortunate that we don’t have a proper name for them; Mini LPs? Maxi EPs?

I write when I travel, when I’m disengaged. I write when I’m on holiday. I wrote three of these songs in a blue house on the Suffolk coast. There was a piano in the blue house and I bought my baritone ukulele. I tasted every beer from the local brewery and rated them in a table in my notebook.

Leaves and Stars is about the cycle of wedding, christening, divorce, wedding. At the age of 42, too many of my friends are on the third stage. Nothing stays the same. It’s a song about acquiescence and letting go, accepting change and letting it wash over you.

Words change too, or at least their popularity does. Remember when words like ‘blackleg’, ‘scab’, ‘picket line’ and ‘strike’ were more common? They were barbed, sharp, violent words. They were necessary. Blackleg is a song about collaborating with the enemy.

When the School Sold Its Fields is about trying to remember when it first went wrong, or at least when I first noticed things going awry. When I was ten or eleven I remember my school selling its playing fields for a housing estate. Soon all the schools sold part of their fields. Many schools now have housing estates where the kids used to play. The song also concerns a memory I have of me being dressed up by my parents as a ‘China man’ for the PTA International Dinner. Mrs Morgan, our head teacher, had passed away. They held a silence and it was the first time my mind had confronted death. I cried.

Kurhaus Blues was written on an earlier holiday in Semmering, Austria. In fact I have a whole album of instrumentals on the subject of Semmering. We walked around a ruined Kurhaus, lost amongst the mountains and trees. I imagined it when it was new. I do this a lot; imagine old things new.

Loose Change was written by my friend Valentine Leys. She sang one of mine, so I sang one of her's. Valentine's is better.

Blue House was made especially for Indie Label Market 29 November 2013. It will also be available directly from www.hefnet.com and a few select record shops.